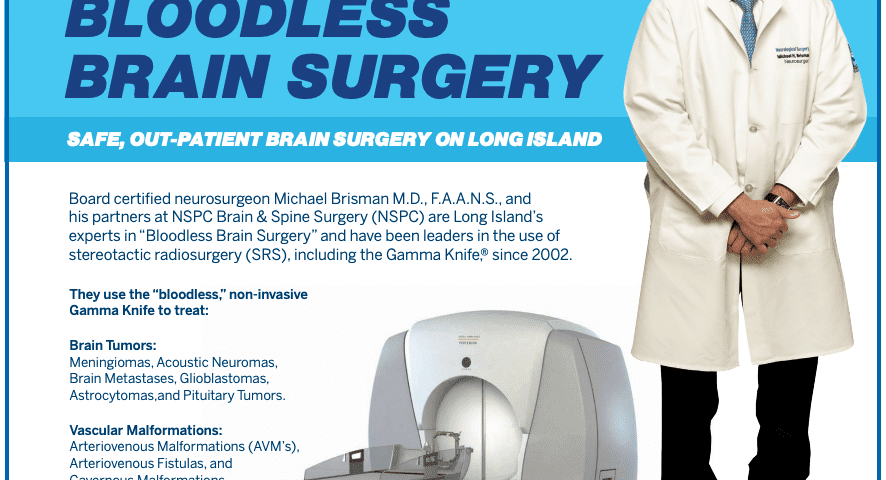 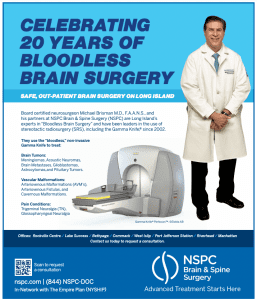 (Rockville Centre, NY – August 11, 2022) Since 2002, the neurosurgeons at NSPC Brain & Surgery of Rockville Centre, NY, have been leaders in the use of stereotactic radiosurgery (SRS), including Gamma Knife ®, to treat a variety of complex, adult and pediatric brain, spine, and neurovascular conditions. During the last two decades, thousands of “bloodless,” out-patient procedures were performed right here on Long Island by Michael H. Brisman M.D., F.A.A.N.S. and several of his partners, including Jeffrey A. Brown M.D., F.A.C.S., F.A.A.N.S., and Ramin Rak M.D., F.A.A.N.S.

Dr. Brisman is the co-medical director of the Gamma Knife Center at Mount Sinai South Nassau in Oceanside. This facility was the first center on Long Island to offer Gamma Knife ® radiosurgery in 2002.

The word “stereotactic” refers to a technique for accurate localization of a target in three-dimensional space. The word “radiosurgery” refers to a technique of using highly focused radiation beams on a “biological target,” such as the human brain or spine, to achieve the same effect as with traditional open surgery. SRS combines these two operative techniques and provides a solution to the problem of how to use a single, minimally invasive surgical technique to effectively treat diseased organs without harming the more superficial structures that the treatment must pass through. Dr. Brisman refers to SRS as “Bloodless Brain Surgery.”

Which patients benefit most from safe, out-patient brain surgery?

According to Dr. Brisman, candidates for SRS include most adults with:

– Pain conditions, such as trigeminal neuralgia (TN) and glossopharyngeal neuralgia.

“In the past,” notes Dr. Brisman, “some of these tumors were treated by irradiating the entire brain, which took a month, and could cause hair loss and memory problems. Now, we can perform one-day, super-focused, out-patient SRS treatments. These procedures,” he says, “typically take 30 to 60 minutes, and it’s usually curative for most patients.”

To learn more about “Bloodless Brain Surgery,” or to make an appointment for a consultation with Dr. Brisman, please call1-844-NSPC-DOC or visit ​​​​​https://nspc.com/specialties/stereotactic-radiosurgery-center/

Founded in Freeport in 1958, NSPC Brain & Spine Surgery (NSPC) has grown to become one of the largest, private neurosurgical groups in the U.S. with seven conveniently located offices on Long Island. The practice’s 21 experienced neurosurgeons are experts in “Bloodless” spine and brain surgery, including endoscopic spine surgery, radiosurgery, endoscopic brain surgery, and other minimally invasive techniques. These advanced procedures are used to treat herniated disc, spinal stenosis, brain tumors, trigeminal neuralgia, and other conditions. Please visit www.nspc.com for more information.