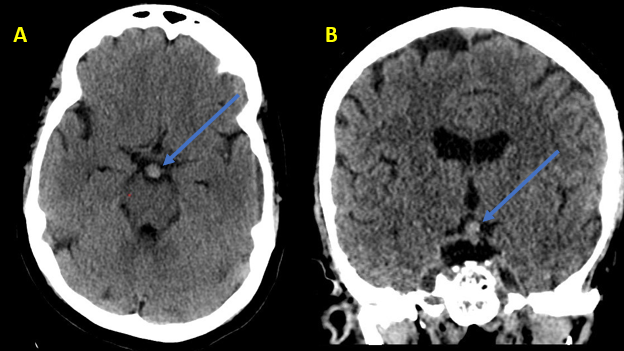 A 66-year-old woman who recently fell while walking her dog, suffered a right facial laceration that required emergency room evaluation. A non-contrast CT of the brain was unremarkable for underlying hemorrhage or stroke. However, an incidental 8 mm aneurysm of the basilar artery terminus was identified (Figure 1). She had no signs or symptoms to suggest a symptomatic presentation, specifically headache, loss of consciousness, or intracranial hemorrhage. She had no prior history of intracranial hemorrhage or stroke, and reported occasional mild headaches and a history of migraine. 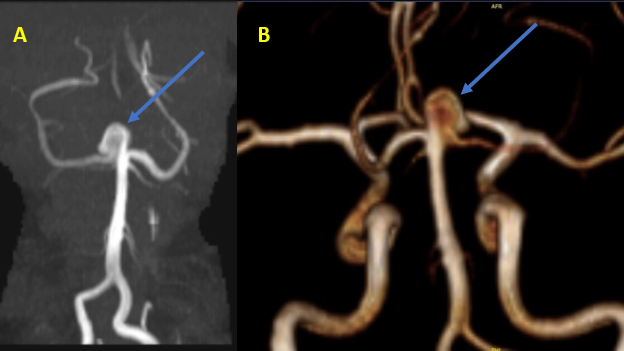 Her neurological review of systems was negative for vision disturbance, diplopia, lateralizing weakness, or paresthesia. A brain MRA confirmed a multilobular aneurysm of the basilar terminus measuring approximately 8–9 millimeters in maximal diameter (Figure 2).

After extensive discussion and counseling on the potential management options, including surveillance, endovascular therapy, and potential open surgical clipping, we recommended that she strongly consider endovascular treatment for this relatively large aneurysm. Overall, the location of the aneurysm at the basilar artery terminus appeared to be of high risk in an otherwise relatively healthy woman. She agreed to proceed with treatment. After preparation with dual antiplatelet therapy for the possibility of stent-assisted coiling embolization, catheter angiography was performed that confirmed a 9 x 8 x 7 mm aneurysm with an irregular multilobular morphology and a relatively wide neck measuring 4–5 millimeters (Figure 3). Both posterior cerebral arteries were dominantly supplied by the basilar circulation, with no significant posterior communicating arteries-supply from the internal carotid arteries. This suggested that it was critical to preserve both P1-segments of the posterior cerebral arteries during treatment (Figure 3). 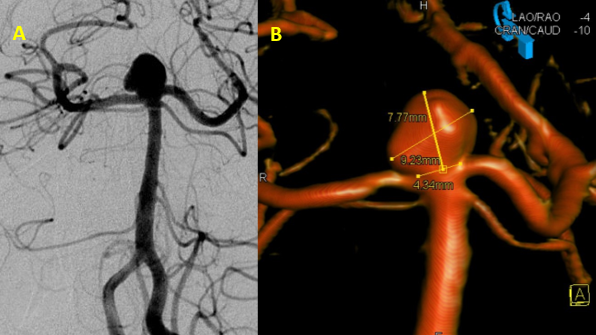 Figure 3: Digital subtraction angiography (A) and 3-D rotational angiography (B) confirm the size, location, morphology, and the relationship of the posterior cerebral arteries with the aneurysm neck.

Based on the dome to neck ratio of approximately 9/4.5 or approximately 2.0, we attempted primary coil embolization (without stent assistance) with placement of a large framing coil within the aneurysm dome/sac (Figure 4 A). With satisfactory placement of this framing coil, additional coil embolization was performed without encroachment and wide patency of the bilateral posterior cerebral arteries (Figure 4, B and C). 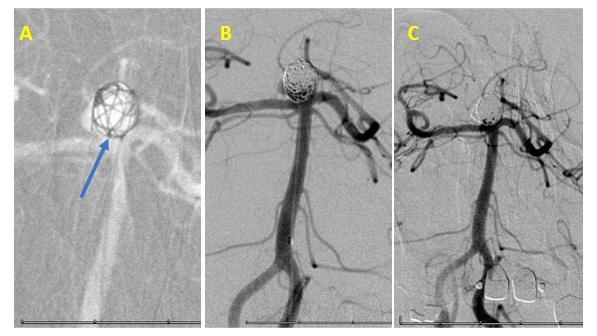 Figure 4: Initial framing coil (A) and subsequent filling coils obliterating the aneurysm sac (B and C).

At the conclusion of the procedure, no stent was required and there was complete occlusion of the aneurysm without significant residual filling. Both posterior cerebral arteries were widely patent without encroachment by the coils (Figure 5). 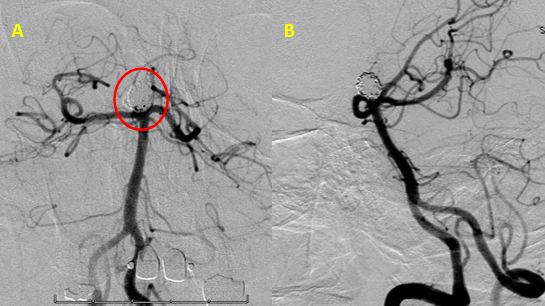 She tolerated the procedure well and without neurologic deficits and was discharged home within 1 day following her operation. She returned to all of her activities of daily living. Her initial follow-up angiogram was performed at 8 months that demonstrated stable and complete embolization of the aneurysm (Figure 6). 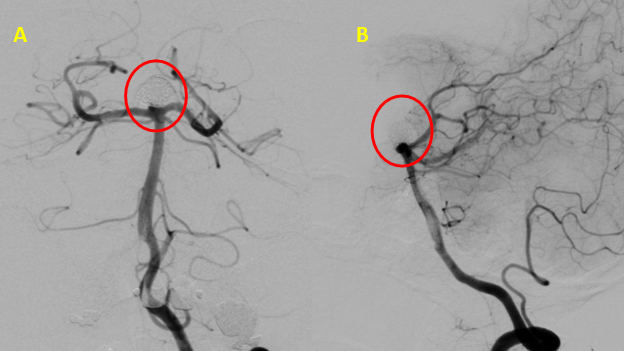 Cerebral aneurysms (CAs) can pose a serious health care burden when they rupture which often results in a high case fatality and morbidity. These aneurysms are characterized by a local deterioration of the arterial wall with associated loss of the internal elastic lamina and disruption of the media.  Increasing evidence and research suggest a strong inflammatory component to CA formation which is felt to be initiated by an insult, e.g. hemodynamic, that leads to matrix metalloproteinases (MMPs)-mediated degradation of the extracellular matrix and apoptosis of smooth muscle cells (SMCs). These lead to progressive weakening of the arterial wall and may result in dilatation and aneurysm formation. Chalouhi et al. conducted an excellent review of CA formation, growth, and rupture risks which included the potential role various inflammatory mediators (including macrophages and their effect on SMCs).[1]

Prevalence and Incidence of Brain Aneurysms:

The prevalence of incidental unruptured CA has been studied extensively in many different demographic groups (age, nationality, gender, familial) and a variety of screening modalities (autopsy, MRI, angiography, CT-A).  These studies have suggested a prevalence of between 2 to 5% in middle aged and older people (>40y and >70y), with increasing incidence in the 7th decade in women and 8th decade in men. A MRA-registry of >4,500 patients in Japan found an overall incidence of 2.8% of all their patients (2.1% in men, and 3.4% in women).[2]  A meta-analysis performed by Vlak et al. of 68 studies and 83 study populations (1,450 UIAs in 94,912 patients from 21 countries) confirmed similar prevalence figures across countries. Their review suggested that patients under 30 had a very low incidence of CAs, and that women above the age of 50 appeared to have an increasing prevalence of aneurysms as well as larger aneurysms, which they postulated may partially explain the higher incidence of CA associated subarachnoid hemorrhage in the older female population. Probable risk factors for aneurysm development include autosomal dominant polycystic kidney disease, familial history of SAH, hypertension, and smoking (in addition to older age and female gender).[3]

The natural history of an incidentally discovered CA remains controversial and has not been well studied in prospective cohorts with measures to minimize bias. Existing studies are confounded most significantly by referral or treatment bias. One study, The International Study of Unruptured Intracranial Aneurysms (ISUIA) enrolled patients in a prospective registry (USA, Canada, Europe) where 4,060 patients were assessed and placed into observational, open surgery (1,917), and endovascular (451) cohorts. In addition, they were separated into 2 groups based on history of presenting SAH. Their findings suggested that aneurysms less than 7 mm within the anterior circulation (ICA, Acom, ACA, MCA) had a very low risk of SAH (0% over 5 years), while increasing size (7-12, 13-24, >25 mm) increased the 5-year risk of rupture to 2.6, 14.5, and 40%; and posterior circulation aneurysms including pCom aneurysms (arising from the ICA) had comparable to higher rates of rupture based on size.[4]  A larger, more recent prospective cohort study performed in Japan (2001-2004), followed 6,697 aneurysms (of which 91% were discovered incidentally) for a total of 11,660 aneurysm-years. The annual rupture rate for all aneurysms in this population was 0.95%. However, 2,722 patients with 3,050 aneurysms also underwent endovascular or surgical repair of their aneurysm before rupture, further limiting the generalizability of these “natural history” risk assessment studies. Their study did suggest higher hazard ratios for aneurysms of the anterior communicating artery (HR 2.02), ICA-posterior communicating artery (1.90), and basilar tip (1.49), even at smaller sizes of less than 5-7mm. Additional risk factors for rupture in their study population included female gender (HR 1.54), Age >70 (1.21), Hypertension (1.41), and presence of a “daughter sac” (1.63).[5]  Although this study didn’t find a statistically significant association, many studies have suggested that a history of current or former smoking, or family history of SAH may have an increased risk for future hemorrhagic events.

The decision to observe or treat an incidentally discovered aneurysm remains complex, and one that should be performed with an informed and in-depth discussion with each patient and consideration of their risk factors, age, risk-tolerance, and life-expectancy by neurovascular professionals. An interdisciplinary team approach is recommended. Many different prognostic tools have been developed including the popularly employed PHASES score by Greving et al. which was derived from a pooled analysis of six prospective cohort studies (including the 2 largest cited above), in an effort to provide rough guidance on natural history risks for these incidentally discovered CA. PHASES incorporates 6 factors (Population Ethnicity, Hypertension, Age, Size, Earlier SAH, and Site of aneurysm) for which points are given to assess individual patient risk.[6] (Table, Greving etal., PHASES) 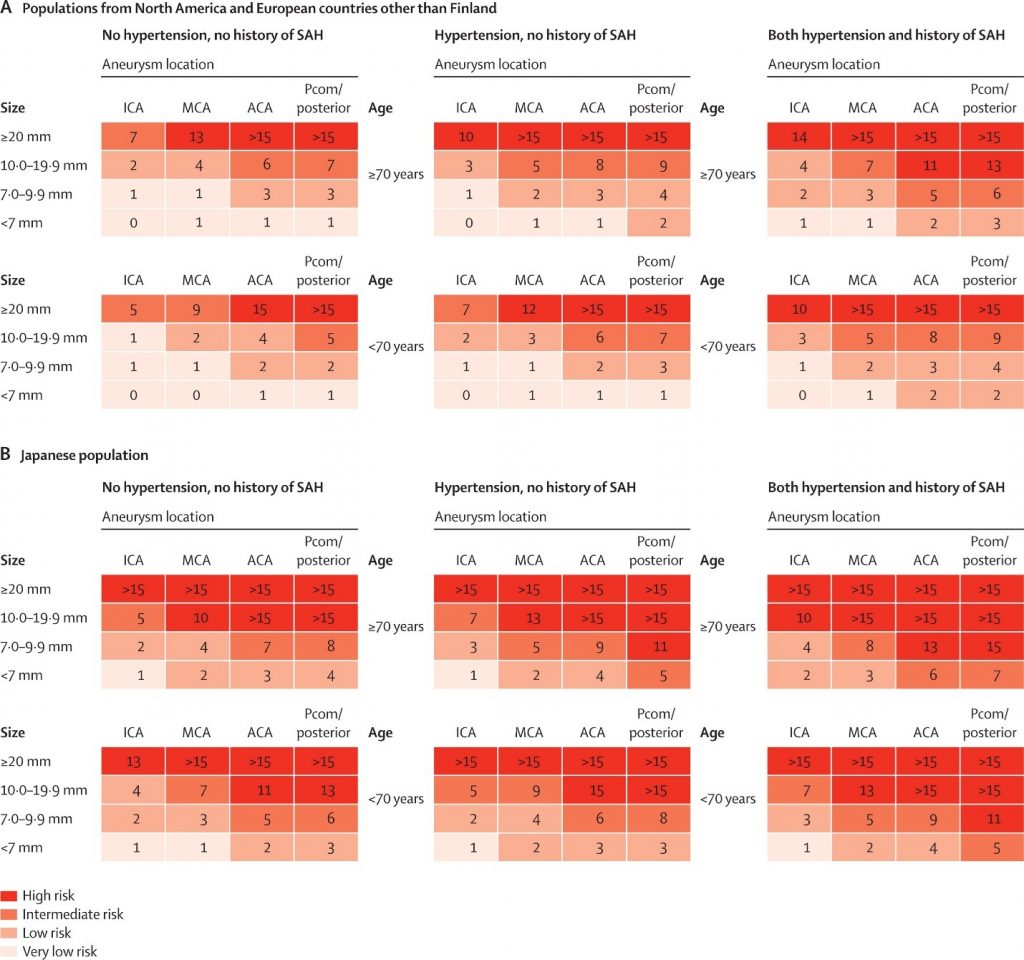 After a patient has undergone a thorough risk assessment and has decided to proceed with treatment, the evolving neurovascular therapeutic strategies that can be employed have grown substantially over the last several decades. Coil embolization (with or without balloon/stent remodeling) remain the primary approach to most unruptured aneurysms, although there has been growing early experience with new technologies, including “flow diverters” and “flow disruptors”, that offer promise in applying primary endovascular treatment for complex and previously challenging aneurysms (e.g. giant >20mm and complex wide-neck bifurcation aneurysms). Surgical clipping and associated bypass strategies also remain viable options, but careful consideration of endovascular (EV) and open surgical (OS) procedural risks must be performed and discussed with each patient, as many studies suggest a reduced clinical risk with endovascular techniques: Wiebers et al, ISUIA – EV (9.8%) vs OS (12.6%) at 1 year; Lee et al. EV (8.8%) vs OS (17.8%)[7]; Algra et al. EV (4.96%) vs OS (8.34%).[8]  Although Algra’s more recent analysis suggests enhanced safety of both treatment strategies with time, the results are limited by compiling and collating uncontrolled studies and their inherent methodological design flaws (retrospective, absence of independent adjudication, publication bias, etc.).

In conclusion, the management of incidental, asymptomatic CAs remains a complicated and challenging endeavor that requires the experience and judgement of a seasoned cerebrovascular team of specialists working closely with each patient to tailor a management and risk-mitigation strategy that is best for their own individual situation.