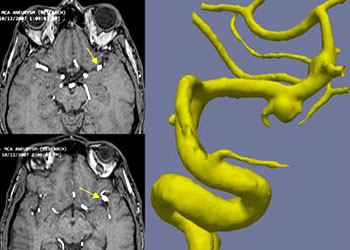 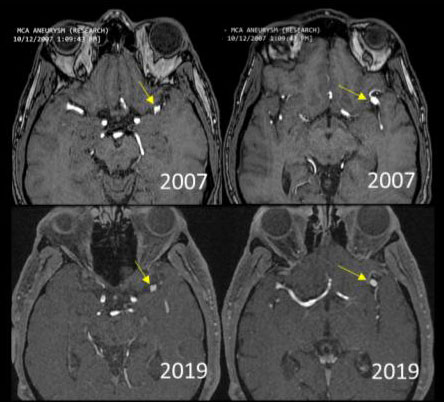 This is a case study from the Center for Unruptured Brain Aneurysms (CUBA) of NSPC where several hundred patients with unruptured brain aneurysms are followed in an individualized clinical surveillance and treatment program. White man with polycystic kidney disease, now in his 60s, who was diagnosed with two unruptured brain aneurysms of the left middle cerebral artery (5x5mm and 7x5mm) in 2007 during a routine screening test (Figure 1).

There was increased risk for occurrence of brain aneurysms due to the presence of polycystic kidney disease. However, the overall risk of aneurysm rupture was assumed to be relatively low. The patient was not a smoker, had no arterial hypertension, and a negative family history for brain aneurysms. He agreed to be included in the individualized unruptured brain aneurysm surveillance and treatment program of NPSC’s Center for Unruptured Brain Aneurysms. In addition, the patient participated in an experimental drug program with daily oral dose of minocycline which was well tolerated. 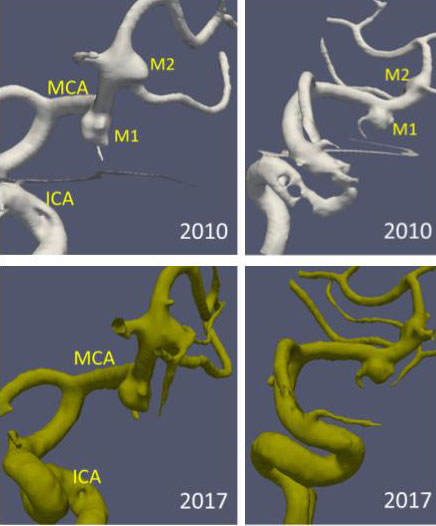 Approximately 3% of the US population live with a brain aneurysm (sometimes there are multiple aneurysms) and most of the time, the aneurysm is asymptomatic1. Rarely are people aware that they have a brain aneurysm, and the first diagnosis is often made following brain imaging obtained for unrelated reasons or from screening. The annual incidence of aneurysmal subarachnoid hemorrhage is 30,000 in the US. Although a devastating type of intracranial hemorrhage and the most feared outcome in patients with unruptured brain aneurysms, it is very likely that most patients will live a life uninterrupted by symptoms caused by the brain aneurysm.

Statistics aside, on an individual patient level, the best course of action for the majority of patients with unruptured brain aneurysms is observation with routine clinical and imaging follow-up. The risk of rupture of brain aneurysms varies widely depending on numerous clinical and anatomic factors. Understanding the true risk of rupture (and the risk of treatment procedures) is important to devise the best management plan (observation, interventional or surgical treatment) for individuals living with brain aneurysms2. Some risk factors of rupture are known and commonly accepted (e.g. size, location, smoking, arterial hypertension, family history). However, exactly how much these risk factors account for the overall risk and which other yet unknown factors may influence the future outcome are part of the ongoing research and still left to be determined.

Systematic clinical observation of unruptured brain aneurysms over a long period, as attempted with the individualized surveillance and treatment program provided by the Center for Unruptured Brain Aneurysms, helps to identify and determine risk factors of rupture which are parts of the puzzle to better understanding the natural history of unruptured brain aneurysms. Minocycline, a tetracycline derivative antibiotic, has anti-inflammatory and metalloproteinase-inhibitory properties, and has shown to have aneurysm wall stabilizing effects in animal models3.

CATEGORY: ENDOVASCULAR // THE (NOT-SO) CURIOUS CASE OF A MAN WITH TWO BRAIN ANEURYSMS