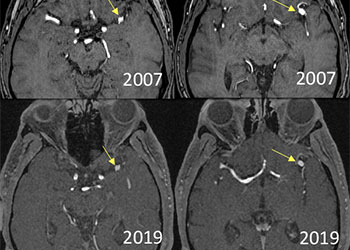 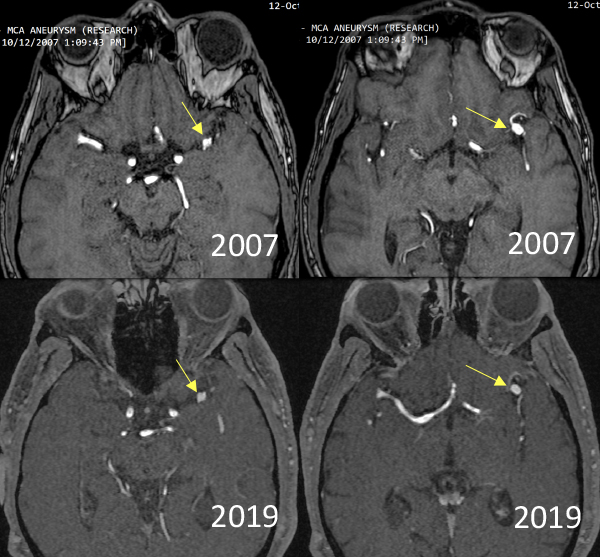 Figure 2. Two unruptured left middle cerebral artery aneurysms (M1, left and M2, right) 12 years after the first diagnosis. MRA 3D time-of-flight from 2019.
There was an increased risk for the occurrence of brain aneurysms due to the presence of polycystic kidney disease. However, the overall risk of aneurysm rupture was assumed to be relatively low. The patient was not a smoker, had no arterial hypertension, a negative family history for brain aneurysms, and agreed to be included in an individualized unruptured brain aneurysm surveillance program. In addition, the patient participated in an experimental drug program with a daily oral dose of minocycline which was well tolerated.

Twelve years following the diagnosis of two brain aneurysms, the patient remains asymptomatic with stable anatomy of both middle cerebral artery aneurysms (last brain MRA from 2019 shown in Figures 1 and 2; 3Drendered images from 2010 vs. 2017 in Figure 3). Predicted 5-y risk of rupture is 0.4% (95% CI 0.1-1.5%) per PHASES risk score. 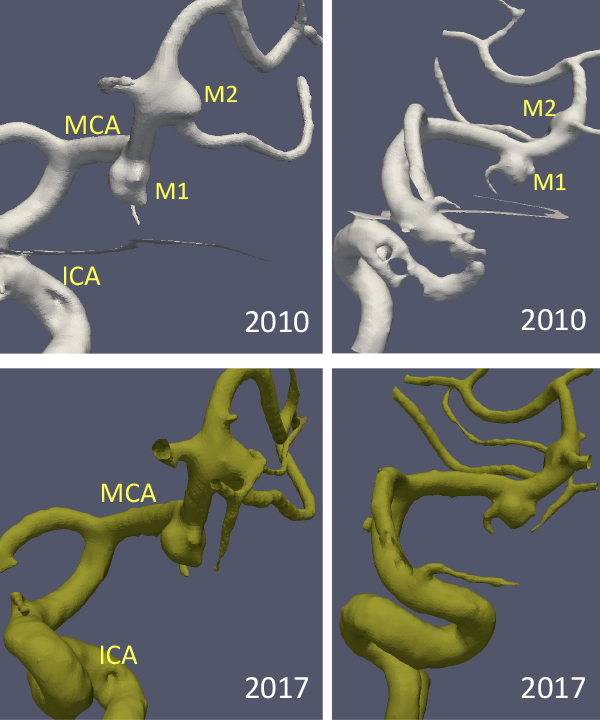 SUMMARY:
The risk of rupture of brain aneurysms varies widely depending on numerous clinical and anatomic factors. Understanding the true risk of rupture is important to devise the best management plan (observation, interventional or surgical treatment) for individuals living with brain aneurysms. Some factors are quite reliable (e.g. size, location, smoking, arterial hypertension, comorbidity, family history) and many are left to be determined. Systematic clinical observation of brain aneurysms over a long period, as attempted with the individualized surveillance and treatment program provided by the Center for Unruptured Brain Aneurysms, helps to identify and determine risk factors of rupture. Minocycline, a tetracycline derivative antibiotic, has anti-inflammatory and metalloproteinase-inhibitory properties and has shown to have aneurysm wall stabilizing effects in animal models.

This is a case study from the Center for Unruptured Brain Aneurysms (CUBA) of NSPC where several hundred patients with unruptured brain aneurysms are followed in an individualized clinical surveillance and treatment program. A 50-year-old female with polycystic kidney disease who was diagnosed with two unruptured brain aneurysms of the left middle cerebral artery in 2007 during a routine screening test (Figure 1).